Get a Free Quote

Smoke detectors are one of the most important safety devices you can have in your building. Smoke detectors provide early warning and enable emergency action in the event of a fire.

They are inexpensive, easy to install, unobtrusive, and require very little maintenance, and no building should be without them.

A smoke detector (sometimes called a “smoke alarm”) is a safety device that detects airborne smoke and issues an audible alarm, thereby alerting nearby people to the danger of fire. Most smoke detectors work either by optical detection or by ionization, but some of them use both detection methods to increase sensitivity to smoke. 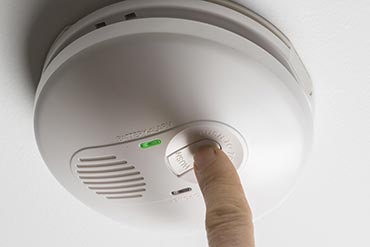 This type of detector includes a light source, a lens to collimate the light into a beam, and a photodiode or other photoelectric sensor at right-angles to the beam. In the absence of smoke, the light passes in front of the detector but does not fall on it. When visible smoke enters the beam, some light is scattered by the smoke particles, and some of the scattered light is detected by the sensor. An increased output from the sensor sets off the alarm.

This type of detector is cheaper than the optical detector, and can detect particles of smoke that are too small to be visible. It includes a tiny mass of radioactive americium-241, which is a source of alpha radiation. The radiation passes through an ionization chamber, which is an air-filled space between two electrodes, and permits a small, constant current to flow between the electrodes. Any smoke that enters the chamber absorbs the alpha particles, which reduces the ionization and interrupts this flow of current, setting off the alarm. Hot air entering the chamber changes the rate of ionization and therefore, the electric current level, which triggers an alarm.

Most residential smoke detectors run on alkaline batteries. If these batteries run out, the smoke detector will become inactive. Most smoke detectors are designed to signal a low battery condition, but it is common for houses to have smoke detectors with dead batteries. As a result, public information campaigns have been created to remind people to change their smoke detector batteries regularly. In regions using daylight saving time, these campaigns usually suggest that people change their batteries when they change their clocks. Some detectors are also being sold with a lithium battery that can run for about 7 to 10 years, though this might actually make it less likely for people to change batteries since their replacement is needed so infrequently. Most detectors today, particularly those installed during new construction, are wired to the main electricity flow of buildings. Many of these units also include a battery backup to ensure operation during a power outage.

Most smoke detectors are equipped with a “test” button. Alternatively, artificial smoke can be purchased, which has the advantage of also testing the detector itself. Many people simply wave a lit match underneath the detector to test it, however this is dangerous as it can set the smoke alarm, and the rest of the house on fire. A better way is to blow out a match and wave the smoking match under the detector.